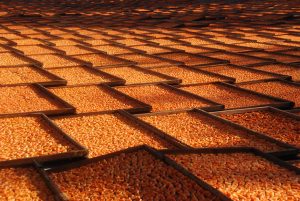 The San Felipe Project, a division of the United States Bureau of Reclamation (USBR) Central Valley Project (CVP), plays an important role providing water for agriculture, industry and municipal use in our county.

Everyone in our groundwater basin benefits from the imported water because the purchased water helps balance the basin by replenishing groundwater.  It takes on average 20,000 ac-ft per year of imported water, about 50% of the total water required, to balance our basin.   It is also superior in quality to groundwater pumped from local aquifers allowing for better quality drinking water and is more conducive to crop growth. The better quality drinking water entering residents and businesses produces a better quality wastewater.  Wastewater is recycled at the City of Hollister’s reclamation plant and used again for agricultural and landscape irrigation. Using water again is very efficient since it’s like getting two gallons of water for every one gallon of water that is imported.

The water that is imported through this system comes from hundreds of miles away – first as snow or rain in the Sierra Nevada range of northern and eastern California, then as water in rivers that flow into the Sacramento-San Joaquin River Delta or directly to water conveyance systems.

San Benito County receives its share of imported water through the CVP. This water is stored at San Luis Reservoir. From there it is pumped through the Pacheco Pass and into our county through a section of pipe called the San Felipe Project. Locally, this water is referred to as “federal” water or “blue valve water” since the pipes at the turnouts where customers access this water are painted blue.

The SBCWD entered into a contract with the USBR to finance the project and act as the delivering agency for a contracted 35,550 acre feet of imported water for agriculture and 8,250 acre-feet for urban customers from the CVP each year. This was after San Benito County residents voted in 1977 with an 82% approval to fund the project.

The local distribution system is comprised of eight pressure reducing turnouts, four pumping facilities, eleven percolation sites, and the 10,000 acre foot San Justo Reservoir. A computerized telemetry system aids in delivering water through over approximately 170 miles of buried pipe. The USBR assets that the San Benito County Water District (SBCWD) shares with the Santa Clara Valley Water District are: The Pacheco Tunnel, Pacheco Pumping Plant and Pacheco Conduit. The District’s share of the capital investment was over $93M in 1987 dollars. 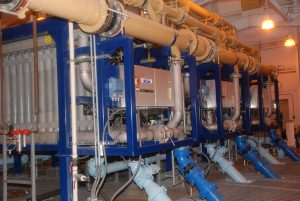 However, annual hydrology and environmental conditions in the Delta can profoundly impact the actual amount of water delivered. During the height of the drought, SBCWD received a 0% allocation for agriculture and 25% allocation for municipal and industrial (M&I) use. Municipal water has a higher reliability since there are health and safety concerns to be considered. In a wet year, the District can receive its’ entire allotment for both agriculture and M&I.

The SBCWD participates in a water banking and exchange program with the Semitropic Water Storage District located in Kern County to help manage variability in imported water supplies. In wet years, the SBCWD stores excess water in the Semitropic Groundwater Bank for use in years when it is needed, such as during dry years.

The SBCWD can also store imported water supplies for shorter periods of time in San Luis Reservoir in Merced County, and locally in San Justo Reservoir.

Imported water supplies are critical to prevent the return of historic groundwater overdrafts in the Hollister Urban Area and surrounding groundwater basin.

As San Benito County developed as an agricultural community in the early 1900s, aggressive groundwater pumping caused an overdraft in our groundwater basin. This trend was reversed after the SBCWD began importing water from the CVP in the 1980’s.