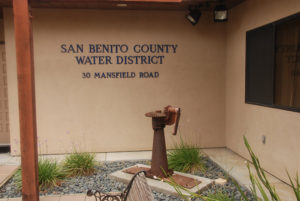 The District has authority by state statute for management of water resources within San Benito County, and is now the Groundwater Sustainability Agency (GSA) for the county. The District is governed by an elected five member Board of Directors, and administered by the District Manager/Engineer.

Everyone in the Hollister-San Juan groundwater basin benefits from the imported water because the purchased water helps balance the overall water needs in the basin, is superior in quality to groundwater pumped from local aquifers and is more conducive to crop growth and vastly improves our drinking water. Local groundwater has varying levels of salts and high mineral content.

The local San Felipe distribution system is comprised of eight pressure reducing turnouts, four pumping facilities, eleven percolation sites, and the 10,000 acre foot San Justo Reservoir. A computerized telemetry system aids in delivering water through over 170 miles of buried pipe. The United States Bureau of Reclamation (USBR) assets that the SBCWD shares with the Santa Clara Valley Water District are: The Pacheco Tunnel, Pacheco Pumping Plant and Pacheco Conduit. The District’s share of the capital investment was over $93,000,000 in 1987 dollars.

Our underground aquifers are of utmost importance. Although our groundwater contains a high mineral content, our groundwater basin acts as an underground reservoir. Its storage capacity is approximately 500,000 acre-feet of water. For comparison sake, San Luis Reservoir has a 2,000,000 acre foot capacity. The three above-ground reservoirs in our county (Hernandez, San Justo and Paicines) hold approximately 31,000 acre-feet combined. San Justo is used to store imported water, Hernandez Reservoir captures water from the highest peak in the county (San Benito Mountain) and helps to recharge the urban groundwater basin by releasing water from the reservoir into the San Benito River. The river makes its way from South County to the north western edge of our county where it converges with the Pajaro River. Along the way, water is diverted off the San Benito River into the Paicines Reservoir where this water is also used to help with recharge efforts.

By using a “diverse portfolio” approach, the District uses all the water sources at its disposal to balance the basin and stores water in and out of the county during wet years. By balancing the water in our basin with these different water sources, the District can minimize the effects of drought and reduced allocations as much as possible. A healthy water supply and good water quality are paramount to economic growth, environmental sustainability and the overall quality of life for residents in San Benito County.